Cinnamon Chocolate Chip Sour Cream Cake. I'm not sure there is a cake out there with a longer title. This is a wonderful cake. I first made it when I was pregnant and obsessed with all things cinnamon-sugar. It's dense and kind of creamy even. There is a good amount of chocolate, but it's not overpowering. There is cinnamon and sugar in the cake and a crisp cinnamon-sugar-chocolate crust. It's amazing. I made this cake for a work party and the left overs were stolen! Luckily, my main man and I had shared a piece for second breakfast (or elevensies if you're kind of a geek.) 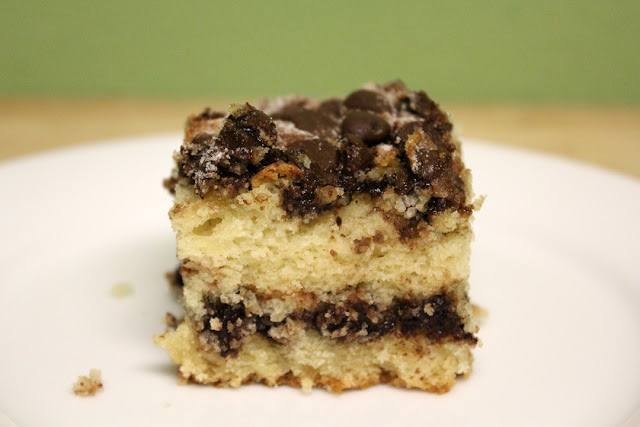 Butter a 9x13 inch baking pan. And lay a sheet of parchment paper in the bottom.

In a large bowl, cream butter and 1 1/2 cups sugar. Beat in egg yolks and vanilla. In a separate bowl, combine flour, baking soda, baking powder and salt. Alternately mix in sour cream and then dry ingredients into the butter mixture until both are used up and the batter is smooth and VERY thick.

Beat egg whites until stiff and then fold into the batter. The batter is REALLY thick but you want to try to fold in the egg whites without deflating them.

In a small bowl, mix together the filling/topping ingredients. The flour helps keep the chocolate chips from sinking.


Bake for 40 to 50 minutes, turning it around halfway through, until a toothpick inserted into the center of the cake comes out clean.

I should have used a bigger bowl to fold everything together. My set up was a bit small!

Like I said, I baked this cake for a work meeting, so it sat, loosely covered for 15 hours or so. It was great and didn't dry out.

This is such a good cinnamon-sugar hit with a nice chocolate kicker. And it easily cuts into 30 pieces. It's a filling cake. 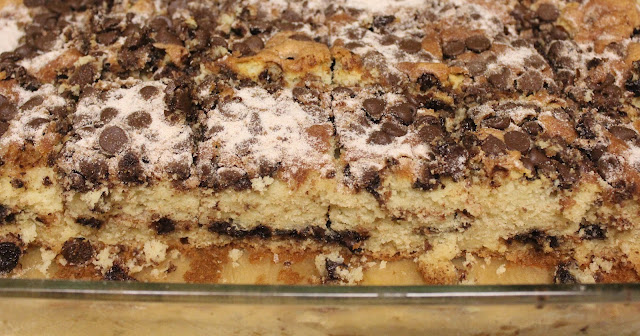 Happy Eating!
Pin It
Posted by Sarah at 2:06 AM